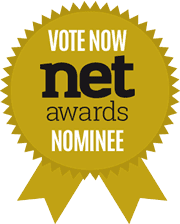 The net Awards return for their fifteenth year, and I’m more than a little surprised to find myself nominated for Designer of the Year. Beyond the other nominees, having worked alongside James Bates – who has helped me solve a number of tricky design problems over the years – to be included in this line-up feels slightly fraudulent.

I suspect this is partly due to my redesign of 24 ways, which launched at the same time nominations were being sought. I had great fun working alongside Drew, Brian, Owen and Anna, and saw first-hand how much work goes into commissioning, producing, editing and publishing the website every December. Its nomination for Best Collaborative Project is well deserved, and approaching its tenth year, a win would be a nice way to celebrate that milestone.

A few other nominees are worth mentioning. Clearleft face tough competition if they are to win Agency of the Year for a third time, while two events I spoke at last year, Front-end London and MK Geek Night, are both nominated for Grassroots Event of the Year.

For Entrepreneur of the Year, Simon and Natalie have been nominated for their work on Lanyrd, which was acquired by Eventbrite in September. Words like ‘entrepreneur’ and ‘acquisition’ tend to make me a bit ranty, but the way they communicated the purchase is worth commending alone: no ‘incredible journey’, just a plain-speaking announcement and a series of API integrations. London’s loss is most certainly San Francisco’s gain.

The merit of awards ceremonies is often discussed (look no further than this very website), but I think net Magazine have struck the right balance. Their competition has improved year-on-year, especially since they started highlighting emerging talent and dropped inane categories like Web Personality of the Year. Events like this are easy to criticise, but when done right, they give us a moment to appreciate an industry we’re lucky to be part of.

Voting is open until 24 March, with the awards presented on 9 May.